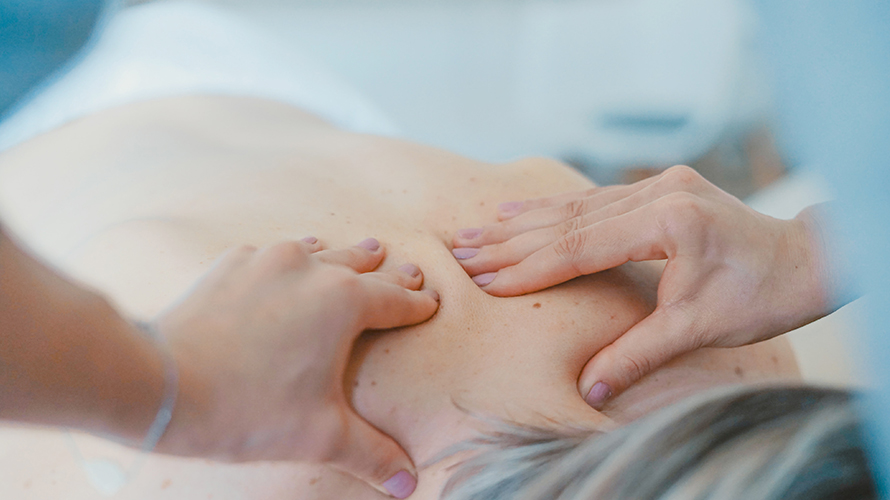 Physiotherapy is the treatment of physical discomfort or limitations of body functions and restrictions in one’s movement. Depending on the indication, different techniques might be used, e.g. manual treatment through massages, stretching or by applying pressure, but also physical stimulants such as heat, cold or radiation and electricity can be applied. The aim is the rehabilitation, preservation or stimulation of health and the achievement of a pain-free state or at least a pain reduction. In order to achieve quicker and better results, our therapists often use radiofrequency.

• Physiotherapy of the pelvic floor

Our physiotherapist places emphasis on the pelvic floor. A normal functioning pelvic floor lifts the organs of the lower abdomen and keeps them in place. It can be consciously activated and assures urine continence amongst others. A limited function of the pelvic floor muscles can lead to loss of bladder control, prolapse of the uterus, various sexual problems, discomfort or even pain.

In many cases there is no sudden appearance of symptoms, but rather a subtle worsening. When looking at the female pelvic floor we should not forget that pregnancies and births are additional physical stress factors. Therefore it is very important to strengthen the muscles of the pelvic floor, especially after birth.

Many women are not able to consciously control their pelvic floor, because after years of having neglected that part of their body, they have finally lost the connection with it. In gynecological reports, „slight stress incontinence“ or „weak pelvic floor“ can often be read as side diagnosis . In such cases physiotherapy of the pelvic floor is the correct treatment to improve its function and avoid a worsening of the symptoms.

There are different approaches to therapy depending on the findings in the first appointment with the therapist, e.g. exercises for self-perception of the pelvic floor, exercises for strengthening the muscles, correction of posture as well as breathing techniques. Various devices will be used during therapy.

• Preparation of the pelvic floor and perineum for birth

Furthermore, the technique of perineal massage will be explained to the patient and her partner. At home, the patient should follow the given recommendations for treatment in order to prepare her body for the upcoming labor and birth.

Postnatal therapy mostly covers the evaluation and treatment of the pelvic floor as well as the abdominal wall after birth. Months of pregnancy and the labor can cause damage not only in the pelvic floor, but also in the abdominal wall. Many women suffer from the so-called abdominal separation, where the straight stomach muscles (diastasis recti) drift apart after birth. This needs to be treated as soon as possible in order to prevent a possible functional limitation in the future.

Many pregnant patients suffer from the feeling of „heavy legs“ or even pain in the legs. This sensation is caused by an edema, which is an accumulation of free fluid in the leg tissue. During pregnancy, edemas can also occur within the pelvis and cause severe discomfort.

Manual lymphatic drainage is a technique that consists mostly in deep tissue massage achieving mechanical decongestion of the tissue. By reducing the edema, the discomfort will be decreased as well.

• Treatment of vaginism and anism

Vaginism, also known as „vaginal cramp“, means an involuntary spasm or tension of the pelvic floor and the muscles of the outer third of the vagina whereby the entrance of the vagina appears tight or even closed. Trying to insert something into the vagina, such as a tampon for example, but also the attempt to have sexual intercourse or a gynecological exam can be experienced as very painful or will even be impossible.

Anism is correlated with vaginism, but at the anus where the involuntary tension of the rectal muscles can cause problems during defecation.

In many cases, physiotherapy is complimented by psychotherapy. Both our therapists work closely together.

• Treatment of a scar after surgical interventions

After a surgical intervention, the postoperative treatment of a scar is important. The aim of the treatment is to obtain a good esthetic result and to prevent functional limitations. Various techniques of physiotherapy, such as radiofrequency, suction cup or massage, but also the application of lotions and oils will prevent later complications. Such complications can be a stretched scar, an atrophic (tightened) scar or even the adherence of the scar that might inhibit the free sliding of the skin over the tissue below.

Radiofrequency can be used for a wide range of indications in physiotherapy. The machine generates a high-frequency current flow that can reach deep tissues and cause local hyperthermia. That leads to an increased blood flow as well as better oxygenation of the tissue. This method can be used to treat scars, to alleviate chronic or acute pain as well as to boost the regenerative process of damaged muscles. Furthermore, it also promotes lymphatic drainage.

Typical indications for using radiofrequency in the pelvic floor are: urinary incontinence, vaginal laxity, chronic pelvic pain, vaginal discomfort during sexual intercourse, separation of the abdominal muscles and the recovery after having given birth. Radiofrequency accelerates the process of regeneration and makes the individual treatments more effective.

But also for treatments of skin rejuvenation, this method is being applied successfully. It is due to the improved circulation and oxygenation in the tissue, that a smoother skin appearance, a firmer skin and a reduction of lines and wrinkles can be achieved.